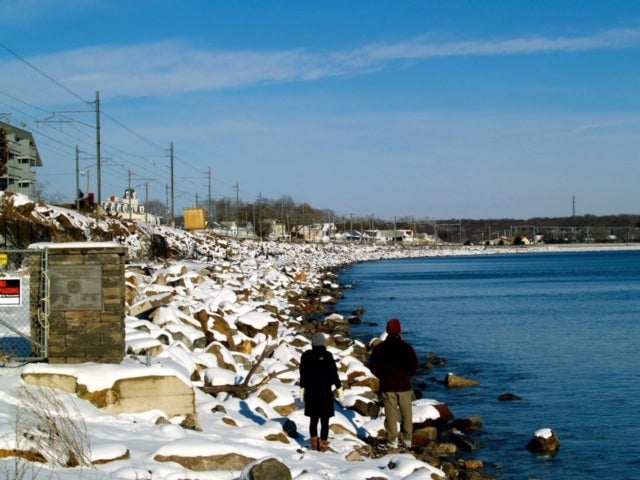 In December 17, 1999, the Voters of East Lyme approved a town-wide Referendum to build the Boardwalk.  Then, in February, 2002, the EL Selectmen established an Overlook Design Committee to advise the EL Building Commission.

The second original plaque lists the Chairpersons from 1994-2005, the Dedicated Volunteers, and The Donors of Boardwalk Property.

Shortly after the Ribbon Cutting for the Niantic Bay Overlook on July 15, 2005, both the Town and the Foundation dedication bronze plaques, mounted on the monument at The Hole-In-The-Wall, were defaced by vandals. Those responsible were suspected but were never apprehended.  In June of 2007, it was necessary to restore the two vandalized dedication bronze plaques for $950.

In 2014, after the storms that had devastated the west end of the Boardwalk, the Monument, which was on the water side, was severely damaged.  In 2015, the Foundation then contracted with The Lou Nassetta Co.  to construct a new monument on the north side of the reconstructed Boardwalk, 60 ft. east of the underpass at the entrance at Hole in the Wall. Bill Sheer, the Town Engineer at the time, conceived the location and placement of the new monument. The Nasetta company would also install three bronze plaques which were to be recessed into the monument.  The cost of these services was $4,675.

In addition, Cavalier Conservation Sculpture was hired to refurbish two of the original plaques and produce one new plaque for a combined cost of $1,950.  The new plaque commemorates the Rededication in 2015 and the Reconstruction during 2005-2015.  This reconstruction took place during the terms of the Selectpersons-Beth A. Hogan, Paul Formica, and Mark Nickerson.  It also acknowledges the Eastern Project Team, the Western Project Team and the East Lyme Public Trust Foundation which conceived and implemented the Boardwalk from 1993-2003.

In 2020, the Foundation voted approximately $4,000 to repair the damage to the original two plaques that had occurred from the elements to which they had been exposed. These repairs are now being arranged.

These plaques give credit to the many individuals responsible for key aspects of the project.  They represent engineers, attorneys, masons, craftsmen, volunteers, donors, and elected officials.  This monument is a reminder of what can be achieved through cooperation between public and private organizations.