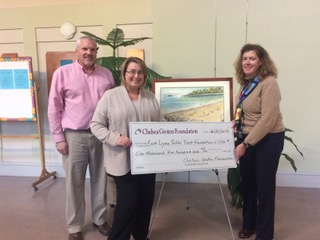 The East Lyme Public Trust Foundation has been awarded a grant of $1,500 to help install beach mats on two local beaches for people with mobility problems. Chelsea Groton Foundation recently approved the funding application as part of its 2017 Fall Grant program for non-profit organizations. The total cost for the ELPTF project , which is chaired by Treasurer Kathie Cassidy, is estimated at close to $3,500.

In the picture the check is being presented to Kathie Cassidy by Jessica Todd, Vice President, Director of Finance for Chelsea Groton Bank, while Dave Putnam, Director of the East Lyme Parks and Recreation Department, looks on. The funds will be used as part of a plan, developed in conjunction with the Parks and Recreation Department, to improve access to the water for people with mobility and stability problems.

The project in part recognizes the increasing popularity of the Niantic Bay Boardwalk and Beach. Tens of thousands of people have visited the Town’s beaches since the Niantic Bay Boardwalk and Beach reopened. The beach mats, made with hard plastic surfaces, will help many of these people who would otherwise have difficulty accessing the water. Two locations, one at Hole In the Wall Beach and the other at Niantic Bay Beach, have been chosen for the installation of the mats, planned for the spring of 2018. The project is in keeping with the Foundation’s goal of improving the quality of life for all people in our region and state.

Since 1999 Chelsea Groton Foundation has awarded grants totally $2.3 million to area non-profit organizations that impact the region in health, human and social services, education, economic development, and arts and culture.