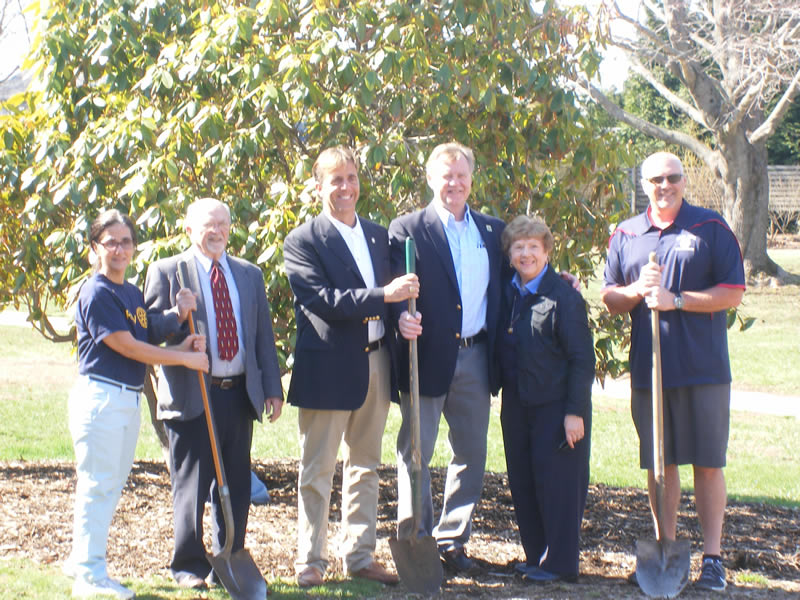 When I invited Senator Formica, I asked him to be the speaker at an Earth Day Celebration.  Because he had no idea that the event was really to honor him, his surprise and gratitude were evident.  Many citizens attended, lending a festive air to the event.

This is the article that appeared in 2015.

On Saturday, April 18, 2015, in anticipation of Earth Day on April 22, The East Lyme Public Trust kicked-off its Trees for Tomorrow, commemorative tree program.  In 1970, Americans first joined in a grassroots demonstration to gather national support for environmental issues.  Now, 45 years later, billions of people participate in Earth Day with the most common practice of celebration being to plant new trees for Earth Day.

In keeping with that goal, the East Lyme Public Trust, in partnership with the East Lyme Parks and Recreation Dept., planted the first tree in its project- Trees for Tomorrow. The East Lyme Rotary sponsored this tree to honor Former First Selectman Paul Formica for his significant service to the town of East Lyme.   First Selectman Mark Nickerson arranged for the planting of a Sycamore tree, which took place at 10 a.m. at the East Lyme Town Hall where Paul had spent his 8 year career as First Selectman before his election as State Senator of the 20th District.

June Hoye, chairperson of Trees for Tomorrow, greeted the group of about 30 citizens. She also thanked The Trees for Tomorrow committee which includes Carol Marelli and Bill Rinoski-Administration, and Pat and Jack Lewis, who assist in Publicity.

Dave Putnam, the Director of E.L. Parks and Recreation Dept. supervised the planting and spoke about the important public-private connection that has been forged between the town and the Foundation. First Selectman, Nickerson, spoke about the many accomplishments of Senator Formica calling them the “seeds he has planted for future generations.”

Senator Formica profusely thanked the group for this honor and praised the Trust for their dedication to improving the quality of life in East Lyme.  Mr. Joe Legg, President of the E.L. Trust Foundation, concluded the ceremony by recognizing the Rotary and their representative, Laura Frisch- the Community Service Chair- for their contribution to this project.  Mr. Legg also mentioned that “The honoree, Senator Formica, is one of the “Good Guys” in elective office who inherently recognizes the benefits of working co-operatively with local people and organizations to improve our quality of life.”  Bob DeSanto, Past President of the Trust was the event photographer.

The East Lyme Public Trust Foundation in co-operation with the East Lyme Parks and Recreation Department has developed this new project to raise funds for the support of the Niantic Bay Boardwalk and other projects of the Trust.  They are offering sponsors a commemorative tree program- TREES FOR TOMORROW- which will make available commemorative trees to be placed in public spaces in East Lyme.

Trees can be donated to commemorate a birth, wedding, graduation, etc.  They can also honor a loved one or a special event.  This is a chance to use the resonating power of trees to create a lasting, living memorial that will provide scenic beauty and contribute to a healthy ecosystem.

(These were the places available in 2015.) A contribution of $600 will cover the cost of the tree, the planting, an 8”x4” plaque, a base, and a water bag to assist in the stabilization of the tree.

Planting will take place in the spring and fall of 2015.  The first phase will offer 25 trees for planting in the various locations chosen by the Tree Warden and the East Lyme Parks and Rec. Department.  Since the East Lyme Public Trust Foundation is a non-profit 401c, contributions are tax-deductible.

Application forms will be available at: East Lyme Town Hall-Town Clerk’s Office, East Lyme Parks, and Rec., East Lyme Library, and the E.L. Book Barn.  They also can be found on the Trust web-site: www.publictrustfoundation.org