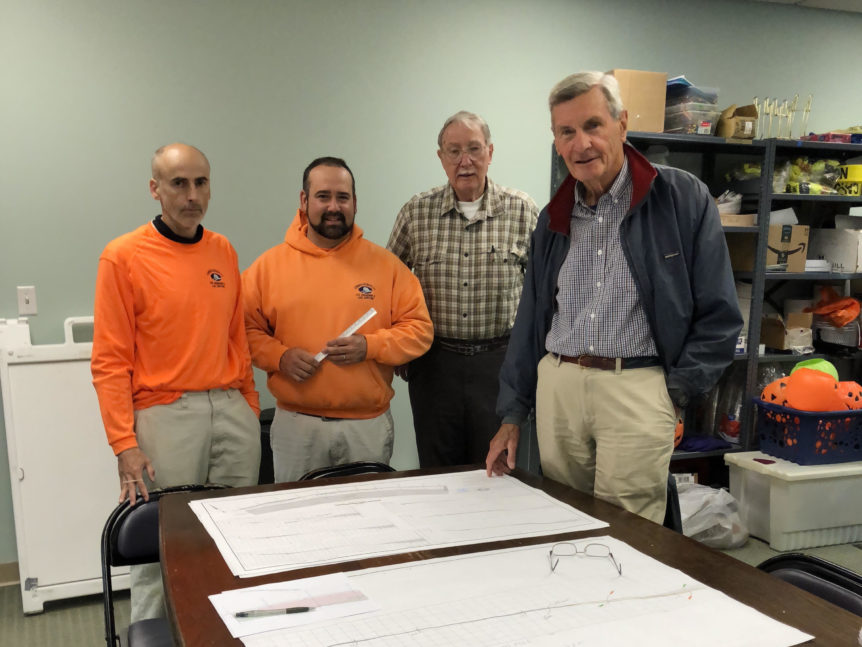 In November 2018 the Public Trust Foundation, in conjunction with the East Lyme Parks and Recreation Department, reviewed the results of its fourth annual topographic survey of Niantic Bay Beach, 2015-2018. The findings, by the land surveying company Gerwick Mereen of East Lyme, indicate that the beach has been relatively stable since the first survey in 2015, despite the passage of a number of energetic storm events.

At a meeting at the Parks & Rec office, surveyors Bob Conigliaro and Mike Mason presented detailed profile charts showing progressive, but non-uniform changes with measurements taken at low tides in October of each year. The charts showed areas of erosion and accretion generally consistent with the movement of sands from the western end of the beach to the eastern end varying in response to storms and tidal flows. Maximum contour changes were on the order of one foot.

James Gallagher, a retired U.S. Navy civilian oceanographer who supervises the project for the Foundation, was encouraged by the findings. He noted that the eastern and western halves of the beach display differing form and shape and seem to be subject to differing wind and current forces. Generally coarser sand grains in the western sector suggest a higher energy zone.

Beach vegetation in the sand dunes section abutting the Boardwalk also plays a role in trapping and retaining wind blown sand. Dr. Juliana Barrett of Connecticut Sea Grant has been advising the Foundation in monitoring and planting of additional beach grass. The Foundation augmented existing growths with beach grass plantings in 2016 and 2018, assisted by East Lyme High School and UConn students. Overall the presence of healthy beach grass cover has helped to increase accretion and dune buildup, and the formation of a significant sand reserve along the back shore of the beach. Pending evaluation over the next year or so, there are no plans for additional beach grass planting in 2019.

Dr. Frank Bohlen, an oceanographer in the Department of Marine Sciences at the University of Connecticut, who originally urged the Foundation to pursue this effort, was also present for the review. He observed that this survey effort is rare in Connecticut and should prove to be of great value in the continuing effort to manage the beach. He emphasized the need to view it as a long-term endeavor in which the public-private partnership is central.

Parks and Rec Director Dave Putnam has agreed to continue to work jointly with the Foundation as it completes the planned five-year study next year. The Foundation plans to maintain copies of the surveys and eventually make them available on its website publictrustfoundaton.org.