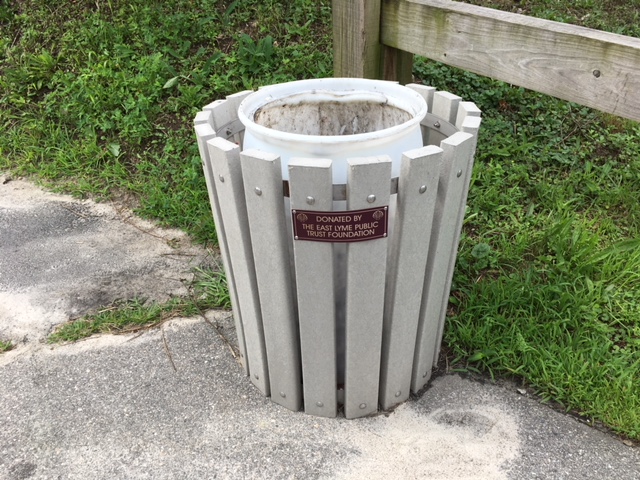 In 2017, June Hoye proposed to the Foundation that they enhance the white plastic trash receptacles at the boardwalk with Recycled Plastic Trash Receptacles which were more pleasing in appearance.  The Foundation agreed to take on this project.

In 2018 we published this article:

The East Lyme Public Trust Foundation is pleased to announce that they have arranged for the purchase of 20, 33 gallon Trash Receptacles to be placed along the Boardwalk, and at Cini Park.  Five of the receptacles have already been placed at the Hole in the Wall, and the Parks and Rec. Dept. is awaiting the delivery of 15 more.  The chairperson of this project is June Hoye, who researched and organized the purchase. Additional thanks to Bill Rinoski who arranged for the donation plaques, and Dave Putnam director of the Parks and Rec. Dept., which installed the plaques. The total donation from the E.L. Public Trust Foundation is approximately $7,000.

In 2019, $1700 was donated in the memory of long-time Vice-President, John Hoye.  These additional receptacles will be purchased and placed out during the coming months.

Architect Mies van der Rohe once said, “God is in the Details”.  The Foundation has attempted to put that idea into action by continuing to increase the beauty of the Boardwalk and the nearby parks.  Please help us to keep the Boardwalk and our Parks free of trash.