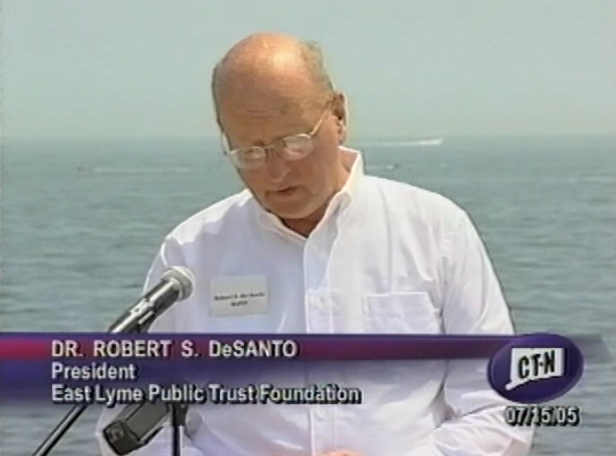 In this series of articles on the East Lyme Public Trust Foundation, we have focused on some of the original volunteers who began this indomitable project in 1994. Today, I want to focus on the person who was rightly referred to as The God Father of the Boardwalk – Bob DeSanto

This article appeared in The Day on May 29, 2016, just after the re-dedication of the Boardwalk. It acknowledges the prodigious contribution made to our town by Bob DeSanto and John Hoye

On Saturday, the East Lyme Public Trust Foundation, in cooperation with The East Lyme Parks and Recreation Department, celebrated the rededication of the Niantic Bay Boardwalk. It was a long journey, with many twists, and it took the help of many people to make it a reality.

The original idea was presented in 1994 by Andy Pappas and Jay Gionet. They were soon joined by other people, five of whom have persevered from then to 2016. Bill Rinoski and his wife Fran agreed to handle the advertising, sale, and installation of the plaques that line the Boardwalk. Betty Purvis, Pat Lewis and Jack Lewis have also been active members of the trust for 22 years. However, the person who has been the guiding star for this group has been its longest serving President, Bob DeSanto, who became involved at the beginning of the project and served as president during the first dedication. DeSanto remained president until 2014, and has continued to contribute in his status as past-president.

DeSanto jokes that he invested his retirement in this project, along with his marital tranquility. There is no aspect of the project that does not bear his effort and time. He was instrumental in dealing with AMTRAK, with the town, and with our members. He researched and guided the installation of the original educational signs and now the re-installed educational signs. It was his vision that researched and got installed the cameras to protect the Boardwalk. He handled the details for the building of the first monument and now the replacement monument.

In 2004, my husband, John Hoye, joined DeSanto on the trust board as vice president. It has been an improbable partnership — DeSanto, a Republican, introvert, and detail-oriented; and Hoye, a Democrat, extrovert, and a people-person.

Being retired, DeSanto, a Ph.D. Biologist, and Hoye, a former state representative of East Lyme, were willing and able to devote the significant time that this project required. This was truly a non-political collaboration, contributing to its success. Over the years they worked with Republican town administrations and Democratic lawmakers, including U.S. Rep. Sam Gejdenson and Sen. Joe Lieberman.

Throughout the many crises which the group faced — including storms that repeatedly damaged the walk-DeSanto never faltered. He slowly kept moving forward, never considering failure to be an option. This was a goal, he said, that he was determined to complete.

Hoye, too, said he was never tempted to give up, though he does recall the anger he felt at realizing that the original Boardwalk had been constructed with an inferior design and inferior materials.

That is all past. The project has been seen to completion.

This is a dream fulfilled. It celebrates, the persistence of the human spirit, the many volunteers who contributed their efforts, and the beauty of nature. Come and enjoy it.

For more information on the Boardwalk visit: http://www.publictrustfoundation.org/.