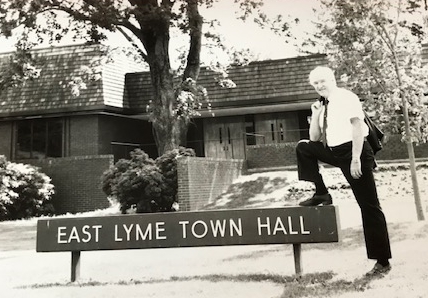 Recently, the East Lyme Public Trust Foundation posted an article about Bob DeSanto, who served as President of the Foundation for 25 years.  For 22 of those years, John Hoye served as his Vice-President.  If one only considers the Leadership meetings once a month, that time commitment comes to 264 hours!  However, there were also general meetings, breakfast meeting, meetings with officials, and phone calls that all had to happen.  Throughout the process, John never considered these volunteer hours to be “work”.

He could regale listeners with stories about the “adventures” that were involved in pursuing these projects for the Foundation.   One story he often told occurred when he and Dave Cini flew to Washington, D.C. to lobby former Rep. Sam Gejdenson.  Another story that he often recounted occurred when he and Bob DeSanto had many meetings in Hartford with a phalanx of lawyers for Amtrak over the rebuilding of the east end of the Boardwalk.  He told those stories with pleasure, always finding the humor in every situation.

He can also be called the Voice of the Boardwalk since he was the Master of Ceremony at the first Dedication in 2002 and then the Re-Dedication in 2016.  In addition, he spoke at the Dedication of the McCook Park Band Shell in 2017.

In January 2015, Dave Putnam, the Director of the Parks and Recreation Department, while speaking to the Foundation, had mentioned a “Wish List” he had of future projects.  One of the items on this list was a Band Shell for concerts and plays in the park.  John knew that the cost of such a project was beyond what the Foundation could provide; however, he saw a way it could be accomplished.

When he presented this idea at meetings of the Rotary and the Lions, the volunteers of these groups immediately were receptive to the idea of having our three community service organizations cooperate together to make this goal a reality.

At the dedication of the Band Shell John said,  “East Lyme has long prided itself on being a Community of Volunteers, always willing to give of their time, energy, and funds to improve the life of the community.   One of the plaques on the Boardwalk says, “Dreams do come true.”  It took The East Lyme Public Trust Foundation 22 years to accomplish The Board Walk Dream.  Now, in two years, continuing in that tradition of service, we are delighted to welcome you all to this Second Dream- The McCook Point Park Band Shell- made possible because of the great co-operation of our volunteers and community organizations working together.   We know that this addition will greatly enhance the life of our community.  Thank you all for coming.”

John certainly has earned the sentiment, “Well done, my good and faithful servant”.

We hope to see many of you at the Band Shell this summer!