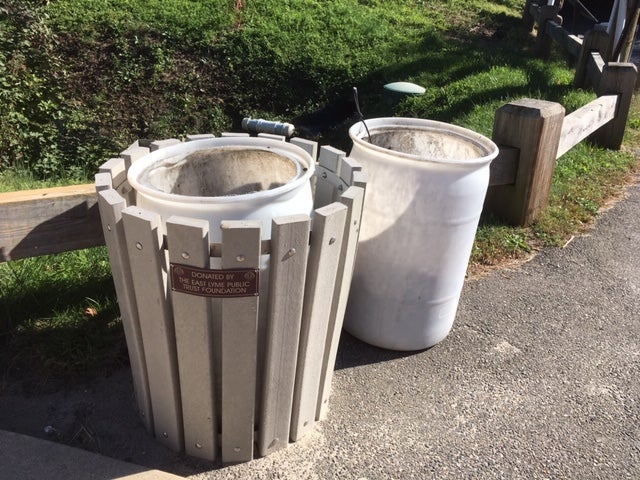 Over the years, the East Lyme Public Trust Foundation has taken on projects to provide some finishing touches at Cini Park, McCook Park, and the Boardwalk.

In 2017, June Hoye proposed to the Foundation that they enhance the white plastic trash cans at the Boardwalk with Recycled Plastic Trash Receptacles which are more pleasing in appearance.  The Foundation agreed to take on this project to purchase 10 receptacles.

In 2019, in honor of John T. Hoye, who served as Vice-President of the Foundation for 22 years, various citizens donated $1,885 to purchase 5 more Trash Receptacles to be placed around the McCook Park Pavilion and the Band Stand.   Mr. Hoye was the person who organized the group that funded the Band Stand- the Public Trust Foundation, the Rotary, and the Parks and Recreation Department. The total for the 25 Trash cans is $8,181

June Hoye is the Chairperson for this project, with help from Bill Rinoski who arranged for the donation plaques, and the Parks and Rec. Dept., which assembled the containers and installed the plaques.

The Architect Mies van der Rohe once said, “God is in the Details”.  The East Lyme Public Trust Foundation has attempted to put that idea into action by continuing to beautify the Boardwalk and the nearby Parks.

We appreciate your comments.  Be sure to follow us on Facebook; we are increasing our followers every month.  Also, go to our website for further information: https://publictrustfoundation.org/