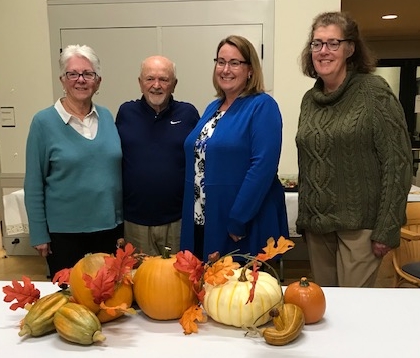 The first speaker of the evening was Dave Putnam, Director of Parks and Recreation.  Mr. Putnam mentioned that the McCook Point Park Band Shell, for which the Foundation organized the funds, continues to be a huge asset for the community.  The recent lighting at the Band Shell, provided by the Trust, has added security and a better experience for the patrons and the bands.

In addition, because the Fusion concert, which the Foundation sponsored, was the largest crowd of the season, the Foundation is happy to again sponsor this band for the Kick-off concert of the 2022 season on July 8.

Mr. Putnam also mentioned that the Beach Grass Program at the Cini Park Beach, which is directed by James Gallagher, has done a great job of stabilizing the beach area in front of the Boardwalk.

Mr. Putnam concluded by saying that the Boardwalk, which the Foundation was instrumental in creating, continues to attract people from all over the state.

Following Mr. Putnam’s presentation, Mike McDowell, the Parks, and Rec. Events Coordinator spoke about the potential of bike and walking trails that could be developed in the Community.

Representative Holly Cheeseman was also present and spoke about the possible sources of grants that may be available to the Foundation.

After the presentations, President Carol Marelli highlighted some of the accomplishments of the Foundation during this difficult, Covid-19 year.   The Foundation has replaced Trees in Cini Park and also planted some new orders.  She also mentioned that the Foundation had initiated a Bench Program at Bridebrook Park.  A complete history of the Foundation, since its inception in 1994, has been written by June Hoye and posted on our upgraded website under the direction of Vice-President, Joe Legg.

She concluded by saying that the Foundation has several projects upon which it is presently working and also has ideas for future projects which will benefit the community.

The evening continued with a light supper, arranged by Rasa Clark and Carol Marelli, and catered by Coffees of Old Lyme.