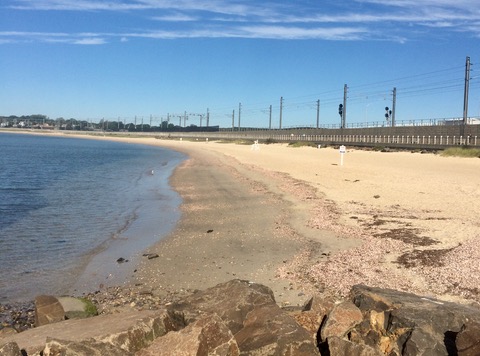 The Foundation’s Board of Directors has approved plans for a new topographical survey of Niantic Bay Beach. It is scheduled for October 2017 and will mark the third survey in the last three years since the beach was opened to the public.
This project is part of an on-going sand profiling program being conducted jointly with the East Lyme Parks and Recreation Department. According to Jim Gallagher, coordinator of the study for the Foundation, this survey should complete the initial profiling series. It is designed to provide information to determine and monitor sand redistribution along the beach. Gerwick-Mereen, a Waterford firm, has been contracted for the work. That company also did the first two surveys.
The data gathered over time will be made available to local and state officials for information and planning purposes. The Foundation has followed through on the recommendations of Dr. Frank Bohlen, UCONN Marine Sciences Department, to monitor beach sand changes caused by natural forces.
As part of the profiling program, The Foundation is also working with local schools and UCONN Sea Grant, with botanist Dr. Juliana Barrett, on the effectiveness of beach grasses in retaining sand dunes. Both studies include a public education component.