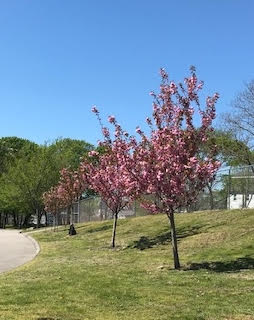 The Promise of Tomorrow’s Trees

By chance, my husband John and I became aware of a program in South Windsor of Memorial Tree Planting.  This town had developed a program that allowed residents or businesses to buy ornamental trees for planting on public property.

In September, my husband, John, and I met with Mr. Rechle, the Tree Warden of South Windsor, to receive more information on the project.

In 2011, we met with the First Selectman, Paul Formica, but the time for such a project was not optimal.  Then, in 2014, we again brought up the idea to the Director of the Parks and Recreation Dept., Dave Putnam.   It was only through his commitment to public-private partnerships that this project was able to be developed.  In 2015, we dedicated the first tree at East Lyme Town Hall.

When we began, we named the program Trees for Tomorrow.  However, in2016, we were notified by an organization in Wisconsin, that they had patented that name.  So, we changed to our present name- The Promise of Tomorrow’s Trees.

A contribution of $600 for a tree will cover the cost of the tree, planting, an 8”x4” plaque, a base, and a water bag to assist in the stabilization of the tree. Since the East Lyme Public Trust Foundation is a non-profit 401c, contributions are tax deductible.

June Hoye is the chairperson for the project in partnership with Dave Putnam, the Director of Parks and Recreation.  Her committee includes Carol Marelli and Bill Rinoski-administration.

Application forms will be available at: East Lyme Town Hall-Town Clerk’s Office, East Lyme Parks and Rec., East Lyme Library, and the E.L. Book Barn.  They also can be found on the Trust web-site: www.publictrustfoundation.org

These application forms will also list other areas for planting that are still available.

Nelson Henderson has written, “The true meaning of life is to plant trees under whose shade you do not expect to sit.”  We are proud to have started this shade for future generations.