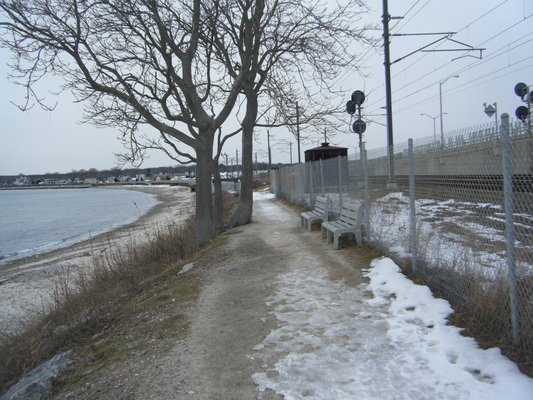 On the East Lyme Public Trust Foundation Web-Site, this diagram of the original Boardwalk is one of my favorites.  Although it is hard to imagine now, when the Boardwalk was first proposed, there were a flurry of objections.  History buffs will find it interesting to read the two scrapbooks of newspaper clippings on the topic which are now at the East Lyme Library.

During this period of controversy, one of the opponents, in a letter to the Editor, referred to the proposal as being merely “A Goat Path”.  As one can see from the photo of the original Boardwalk, the surface was dirt with an inclined surface from Cini Park entrance.

Bob DeSanto, who was the leader of the group, immediately seized upon what the critic had hoped would be a disparaging insult.  Using the term seriously in discussions, he added it to various diagrams and maps.

He turned what the critic hoped would be a lasting taunt into a text book example of how to use humor to diffuse and re-purpose a criticism into a tool to build support for the project!  When navigating Life’s Goat Paths, we should all strive to be nimble and sure-footed.