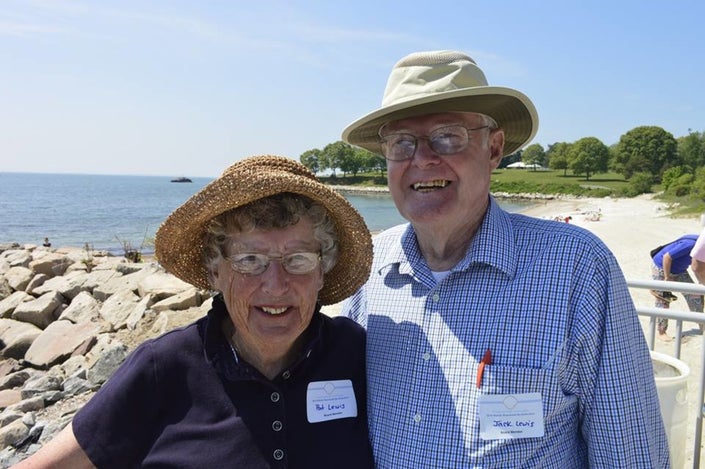 East Lyme has always prided itself on being a community of volunteers.  There is no greater example of that spirit than the creation of the boardwalk that has become an integral part of our community.  We have acknowledged the importance of Andy Pappas and Jay Gionet, the two men who first proposed this idea.  However, their vision could not have become a reality if it were not for the innumerable volunteers who appreciated this dream and were willing to work for years to bring it to completion.

Two of the many volunteers that signed on at the very beginning of the project were Pat and Jack Lewis.  What makes them unique is that they worked on this project for 23 years.  Their names can be found on the boardwalk monument as members of the original group that organized to build the boardwalk.  Throughout the period of construction and re-construction, they attended the innumerable meetings and worked on various sub-committees.

From 2013-2018, they served on the Publicity Committee of The Promise of Tomorrow’s Trees.  Each year they would take on the task of delivering posters to all of the businesses on Niantic Main St.

In 2016, they both were also crucial organizers of the Boardwalk Re-dedication.  After spending hours in the library pouring over the newspaper clippings about the beginnings of the boardwalk, they were instrumental in creating the huge banner which was hung on the boardwalk at the re-dedication, showing clips of these articles.

In addition, while they were devoting themselves to this public service, their example was having a profound effect.  In 2015, their youngest daughter, Kathy Lewis Cassidy, became a member of the Foundation.  She also quickly made her mark on the group.

In addition to becoming the Treasurer of the Foundation, she became known for her fund raising abilities.  It was she who found the sponsors to repair the educational signs that had been damaged during the storms that hit the boardwalk.

In addition, she was the person who decided to make Niantic Bay Beach more accessible for people with disabilities, with walkers, with canes, or parents with strollers.  Shortly before Memorial Day in 2018, as chairperson of the project, she announced that the E.L. Parks and Rec. Commission had installed an ADA compliant beach accessibility surface mat to allow wheelchair access to the Niantic Boardwalk beach.

Ms. Cassidy successfully applied for a Chelsea Groton Bank Grant award of $1,500 to cover a portion of the cost.  The Public Trust Foundation donated the remainder of the purchase price of approximately $2,200.

Ms. Cassidy has reported, “It is the desire of the E.L. Public Trust Foundation to make Niantic Bay Beach and the Hole in the Wall Beach a wheelchair accessible friendly place.  We also want to allow children and adults with mobility impairment to visit and enjoy these beaches”.

Andy Pappas posted this comment on the Lewis family:

Andy Pappas Everyone should know that with all the terrific community projects and community organizations that people enjoy in our town, the one consistent family around all of them is the Lewis family. Our town has been so lucky to have them working to strive to have a better community and most times, it’s behind the scenes. Thanks to Jack and Pat and to their kids and their families too for making us all better people too! Sincerely, Andy

Two generations of volunteers in one family making our community better! Someone once described the power of volunteers by saying, “Volunteering is the ultimate exercise in democracy…when you volunteer, you vote every day about the kind of community you want to live in.”  They made a commitment to share their most precious resource-their time.  We have all been touched by their generosity as they worked toward improving our community.