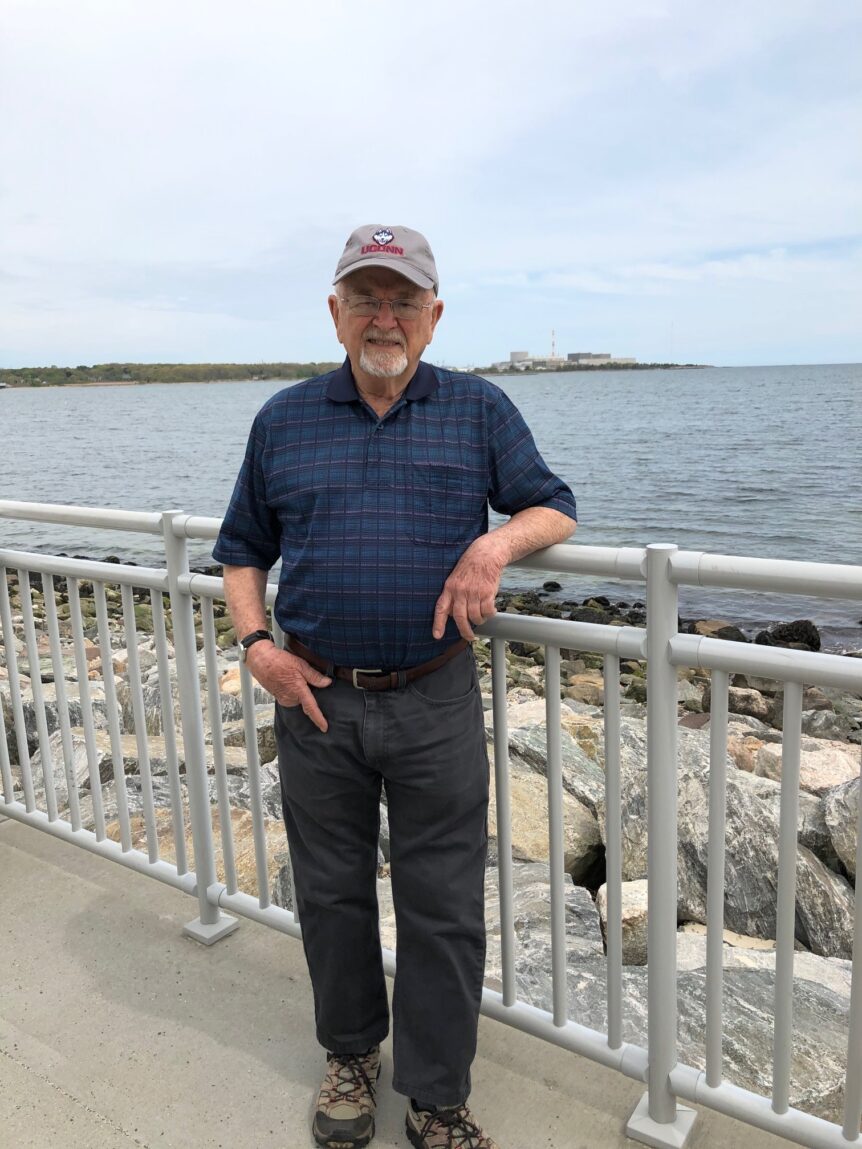 In 2014, when President Dr. Robert DeSanto retired after having served 25 years, the East Lyme Public Trust Foundation knew it would be difficult to “fill those shoes”.  Fortunately, the Foundation was extremely lucky to find its next executive in Dr. Joe Legg, who had been a member for 8 years.

Dr. Legg, who received his PhD. in Clinical Psychology from Syracuse University, served as the Director of the Counseling Center at Lawrence and Memorial Hospital from 1985-1999.  He was initially attracted to join the Foundation because he believed the development of the Boardwalk was a great achievement for the town and its citizens.

Dr. Legg’s tenure as President was filled with outstanding activity and incredible accomplishment.  In 2014, the Foundation completed the donation of the last 50 memorial benches to Parks and Rec for the Boardwalk, bringing the total to 200.  In 2015, with the help of the UConn Sea Grant program, the Foundation developed a unique method to monitor the Niantic Bay Beach ecosystem.

The focus on the Boardwalk and Beach led to numerous ideas to enhance them.   In cooperation with Parks and Recreation, the Foundation bought beach mats for the handicapped, planted beach grasses in cooperation with area high schools and UConn, sponsored topographical surveys, distributed trash receptacles, and published thousands of pamphlets on the beach ecosystem.

In addition to projects on the Boardwalk, the Foundation also took on projects beyond the Boardwalk.  In 2015, the Trees for Tomorrow project began, with memorial tree plantings in different public spaces.  In 2016, the Foundation initiated the McCook Park Band shell project with Parks and Rec, the Rotary, and the Lions.  Also in 2016, under the leadership of Dr. Legg, the Foundation revamped its website, adding a drone video of the Boardwalk called “A Bird’s Eye View-The Boardwalk by the Bay”.

The projects beyond the Boardwalk continued when the Foundation donated benches to the new Main Street Park, continued tree plantings, and financed the new camera security system for town parks.  Many of these endeavors were made possible by the Foundation’s popular memorial plaque program which, by 2018, had well over 2,000 plaques.

Dr. Legg has said, “Although there were a lot of highlights along the way, probably my biggest sense of accomplishment was that the Foundation was able to help the town finish the western portion of the Boardwalk, complete with signage and a new monument.    In May 2016, our Rededication Celebration of the re-built Boardwalk was an exciting accomplishment.

In addition to all of these achievements, Dr. Legg led a concerted effort to recruit new members.  He has written, “At that board meeting, I could feel the enthusiasm, the vibrant talk, the opinions, and the energy in the room.  It was a group of motivated volunteers- a mix of old-timers and newcomers- co-operating together in transition.  Working with that group of people was a most satisfying experience.”

“My lasting impression as president was learning how much mutual respect existed between the town and the Foundation.  Without this cooperation, none of these achievements would have been possible. At an introductory meeting, then First Selectman Paul Formica gave me his personal cell phone number to call at any time.  Parks and Recreation Director Dave Putnam offered to meet regularly and later shared his “wish list” to work on together.

This cooperative spirit carried over with state and federal officials, including congressmen.  It obviously was the result of the Foundation’s previous efforts for the community.  It made my life easier for those five years, especially our close knit cooperation with Parks and Rec.  It also helped that I was riding the coattails of Bob DeSanto.”

As he looked back upon his experience, he wrote, “Along the way, I  learned a lot:  How to plant seagrass, how to survey a beach, the best place to collect driftwood (south shore of Fishers Island), where to order bronzes (a remote back street in East Haven), the best Mason in the area (to construct a monument),  the local music scene(to sponsor a concert at the band shell), the UConn fanatics, the good caterers, outstanding politicians, good business people, town walking/biking trails, how to spend money, how to raise money, how to run a meeting in one hour (by demand), where to store stuff (people’s garages), and the realization that volunteers’ spouses are saints.”

As he reminisced about his time as President he said, “East Lyme has been called a town of volunteers.  A fine example is the East Lyme Public Trust Foundation which relies on the ideas and energy of its people to “improve the quality of life in the town and the region.”  I really enjoyed the group I worked with.”

“There’s a monument to volunteers in a town in Colorado which I once visited.  Wouldn’t it be great to build one like it in Main Street Park to honor the Volunteers who make our town a special place in which to live!” Ralph Waldo Emerson has written, “The purpose of life is to be useful…to have it make some difference that you lived and lived well.”  Dr. Legg has put this idea into action by leading co-operative endeavors between generations of volunteers and co-operative endeavors between government and non-profits. He certainly has made a difference.