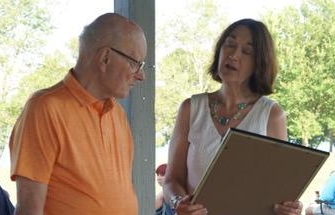 The East Lyme Public Trust Foundation recently recognized Dr. Robert DeSanto for his 25 years of service in working to create the Niantic Bay Boardwalk and Beach at a celebration and band concert hosted by the Foundation at McCook Park Pavilion on July 26, 2019. Officials from the town of East Lyme, the Connecticut State Legislature, and the US Senate awarded certificates highlighting his contributions to the community in achieving this incomparable community attraction.

In 1994, Dr. DeSanto was the Foundation’s first president, and then served again from 2003 to 2014. Dr. Joseph Legg, former President of the Foundation, described him as the “Godfather” of the Boardwalk based on his long-term devotion to completing the project, which first opened in 2005, closed in 2006 after storm damage, re-opened partly in 2013, and finally was completed and re-opened in 2016.

State Representative Holly Cheeseman presented an official citation, a Certificate of Appreciation, from the Connecticut General Assembly. Co- sponsored by Senator Paul Formica and Representatives Cheeseman and Kathleen McCarty, it specifically cited the 25 years he “selflessly volunteered in our community,” including chairing the Zoning Commission, helping form the non-profit Public Trust Foundation, and developing the Niantic Bay Boardwalk and Beach.

Foundation Director of Publicity June Hoye read a Certificate of Accomplishment signed by Senator Chris Murphy that lauded Dr. DeSanto’s efforts to improve the community, to help create and develop the Boardwalk and in …”leaving a lasting legacy for future generations of East Lyme residents and visitors for years to come.”

East Lyme First Selectman Mark Nickerson presented Dr. DeSanto with a Certificate of Appreciation from the Town, honoring him specifically “for your volunteer work in creating and developing the Niantic Bay Boardwalk and Beach.”

In accepting the honors Dr. DeSanto expressed his appreciation to all his fellow volunteers who helped make the dream of the Niantic Bay Boardwalk a successful reality through their time and efforts.