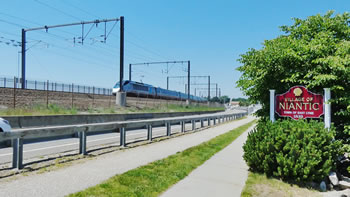 The East Lyme Public Trust Foundation is a not-for-profit corporation created by a group of dedicated citizens of southeastern Connecticut to promote, provide and protect an improved quality of life for all people in the region and state through its activities in the public trust.

ELPTF is probably best known for its first project, the Niantic Bay Overlook.  Our goal was to create a mile-long walkway that would increase the enjoyment of the Bay for the residents of East Lyme, its neighbors, and the citizens of Connecticut.  Planning began in 1994 and, in cooperation with the town of East Lyme,  the Overlook was originally completed in 2005. It suffered storm damage and was eventually reconstructed and rededicated in 2016.  It is is now called the Niantic Bay Boardwalk and Beach.  You can find more about this endeavor in the Projects section of our website.

The Foundation continues to be active and  open to new ideas in the public interest.   It has worked cooperatively  with federal, state and local agencies, and maintains special ties with the East Lyme Parks and Recreation Department and the University of Connecticut.   We developed a live webcam of Niantic Bay now run by the town.  We recently  helped to promote and fund the new McCook Park Bandstand in Niantic.  Current interests include Boardwalk and beach maintenance, the study of beach sand movement and preservation, marine vegetation research,  UConn Sea Grant sponsorship, and  co-management of  memorial bench and tree-planting programs in town parks.  The Foundation also continues to manage a popular commemorative plaque program on the Boardwalk.

We hope that  you will visit the magnificent Boardwalk or view it on our drone video or live webcam.   Enjoy reading the memorials on the plaques and benches.  Delight in the many new trees in the town’s parks.  You can also visit us on our Facebook page Niantic Bay Boardwalk and Beach.   We invite people in the region to join us with your interest and support as we continue our endeavors in the public trust.