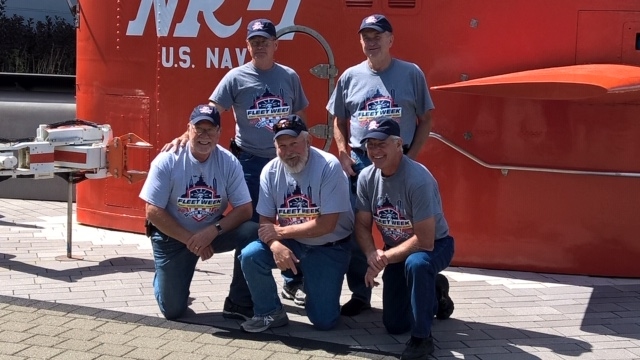 In 1970, John Ort of Waterford and four other submariners arrived in Groton to serve on the USS Thomas Jefferson, which was homeported in Rota, Spain. These five submariners not only served together in Rota, Spain, but also lived together, off base, when they returned, every three months to Groton.  Having met in their 20’s, they have kept these “ties that bind” strong for 50 years.

In 2019, John and his wife Elaina decided to host a reunion of these men and wives in Niantic, Ct.  Elaina, who was in charge of planning the itinerary, chose to have them stay near the Niantic Bay Boardwalk so they could all experience walks along the Bay, a place that she and John loved to frequent.

One of the most memorable events of the reunion was that the group was able to tour the USS Indiana SSN 789 while it was in Groton.  Since many of the wives, who had come from Michigan, Minnesota, Iowa, and Pennsylvania had never been on a submarine, the experience was moving for them.  Elaina said that seeing a sub first hand filled them with “awe at what their husbands had endured, engendering even more respect for their service to the nation.”

Recently, John and his wife got the idea that they would like to celebrate this 50 year friendship of this band of brothers.  John was proud to point out that each of these couples has stayed married for over 45 years, giving credit to the women these men chose. Elaina and John decided that the perfect way to commemorate this friendship was to buy a Board on the Boardwalk with the name of the submarine, the Commanding Officer, and the 5 shipmates, to remember a proud, special time in their lives as they served Uncle Sam. John chose Board 300 to honor this band of brothers: Em2(SS) John Wistrom; IC3(SS) Joe Morgovnik; MM2(SS) Dave Shoptaw; USS Thomas Jefferson SSBN 618 (G); CDR Wild Bill Purdum; IC2 (SS) Bobby Nowell; STS2(SS) John Ort.

The East Lyme Public Trust Foundation is delighted to fulfill this request and suggests that many others might also want to purchase a board to honor a group of friends, family, or shipmates.  Historians in the future will look to the inscriptions on the plaques that line the Boardwalk to realize what life was like in small town America at the beginning of the 21st century.

This act of commemoration brings to mind the hymn that was sung in the play Our Town, by Thorton Wilder.

Blessed be the tie that binds

Our hearts in Christian love;

The fellowship our spirit finds

Become part of that permanent history by sponsoring a plaque for $100 (tax-deductible) or a board with seven plaques for $700(tax-deductible), to be placed on the Boardwalk with your own memory engraved.

All funds raised by the sponsorship of the plaques are used to contribute to the maintenance of the Boardwalk and to other Foundation projects. Join 2,100 people who have purchased plaques on the Niantic Bay Boardwalk.

No need to ask permission to Come on Board to Buy a Board!

They also can be found on the Trust web-site:  CLICK HERE for a photograph of sample plaques. CLICK HERE for a Plaque Application.
Become part of History and memorialize important groups in your lives, while supporting a very worthwhile cause.

Photo1: 1970-Topside on the Turtle Back of the USS Thomas Jefferson