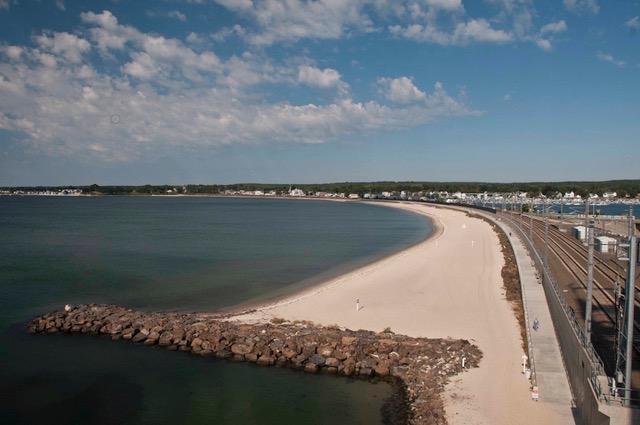 On November 6, 2019, the East Lyme Public Trust Foundation, in partnership with the East Lyme Parks and Recreation Dept., met to discuss their annual survey of Niantic Bay Beach, which they have conducted for the last 5 years.  Gerwick/Mereen, a surveying company of East Lyme, reported that the beach has remained relatively stable.

Surveyors Bob Conigliaro and Mike Mason presented sketches of the 2,200 feet of beach front data, depicting the cumulative changes over the five-year period, They noted the slight buildup of more sand at the eastern end of the beach, near the breakwater groin, in contrast to a slight loss at the western end. The surveyors also found that the expanse of beach vegetation cover has increased over two and one-half times over the five year period, with more pronounced growth on the western end.

At the meeting James Gallagher, who supervises the project for the Foundation, remarked in particular about the success of the vegetation aspect. A retired U.S. Navy civilian oceanographer, Gallagher has overseen beach grass plantings in 2016 and 2018 by UConn and East Lyme High School students. Dr. Juliana Barrett of Connecticut Sea Grant also has helped monitor the plantings. This vegetation growth has been instrumental in helping to build and retain wind-blown sand, especially abutting the Boardwalk.

Parks and Rec Director Dave Putnam, who was also encouraged by the findings, pointed out that most beach-goers occupy the eastern end of the beach, where more sand has accumulated.  His Department will continue to support these efforts which are so vital to beach maintenance.

This study, which offers a rare opportunity to monitor beach dynamics, is part of a broad study the Public Trust Foundation initiated in 2015 at the urging of Dr. Frank Bohlen, an Oceanographer and Professor Emeritus in the Marine Sciences Department at the University of Connecticut. It involves assessing the effects of storms and tidal flows on the beach sand stability, managing the area, and monitoring the role of beach vegetation in dune formation.

After having collected this initial baseline data, the Foundation and Parks and Rec. Department have agreed to stretch the survey time frame to two year intervals and also to possibly after significant storm events. Currently, there appears to be no need for additional plantings.  Copies of the current findings will be forwarded to the State DEEP.  The Foundation also plans to make these findings available on its website, publictrustfoundation.org.