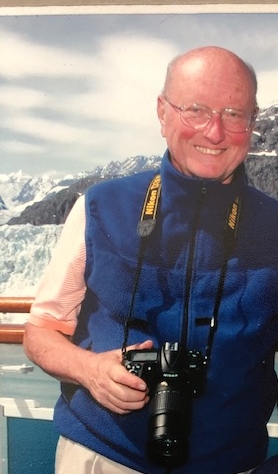 The East Lyme Public Trust Foundation has announced that their long-time President, Robert DeSanto, PhD., has turned over the leadership of the group to Joseph Legg, PhD. The group has expressed their deep appreciation for the leadership, dedication, and perseverance of Dr. DeSanto who served for 10 years as President of the Trust from 2003-2013.

Dr. DeSanto came to this area in 1968, after earning a Doctoral Degree from Columbia University. Having accepted a teaching position at Connecticut College, he then established the Summer Marine Explorations Program at the college. Eventually, after leaving the college, he served for the next 36 years as the Chief Environmental Scientist for various engineering design firms. In 1989, after his retirement, he became an independent consulting ecologist.

While living in East Lyme, he served over 28 years as an appointed or elected official on the Commission of Water and Sewers, and the Conservation, Planning, and Zoning Commissions. He also served on the Zoning Board of Appeals.

During his tenure as President of the E.L. Trust, he strove to lead this non-profit corporation of volunteers in its mission “to preserve and enhance the quality of life and the economic health of the Town of East Lyme and the neighboring communities through the encouragement, co-ordination, and execution of projects designed to achieve these goals.”

Dr. DeSanto was instrumental in overseeing the development of the Niantic Bay Overlook which was dedicated on July 15, 2005. He also developed the Foundation Web Site, provided oversight of the initial 103 park benches which were placed along the 1.1mile Overlook Park, and published monthly progress reports in The Post Road Review, all pertaining to the replacement of Overlook Park during and after the reconstruction of the Niantic River Bridge.

In addition, he spearheaded the purchase, installation and initial management of three surveillance video cameras which the group funded to provide security to Overlook Park and the Hole-in-the-Wall parking area.

He told the group that his most critical accomplishment for the Foundation was to insure that the FRA and Amtrak complied with the Connecticut Department of Environmental Protection’s request for in-kind or better replacement of any impacted Boardwalk components during the bridge replacement project. Through his vigilance, the overlook Park survived the bridge reconstruction project and 9 acres of new beach were created so that the Boardwalk was not degraded in any way as a result of the bridge reconstruction undertaken by Amtrak.

Dr. DeSanto, who has agreed to remain on the Trust as a member, was proud to announce that he will be replaced by Joseph Legg, who has been a member of the Trust since 2006. Dr. Legg, who received his PhD. in Clinical Psychology from Syracuse University, served as the Director of the Counseling Center at Lawrence+Memorial Hospital from 1985-1999. He was initially attracted to join the Trust because he believed the development of the Boardwalk and Overlook were great achievements for the town and its citizens.

Dr. Legg said that although he is interested in developing new projects consistent with our mission statement, his immediate goal is for the Foundation to complete its involvement with the reconstruction of the Boardwalk in conjunction with the Town of East Lyme.

As part of that goal, the Trust is currently partnering with the East Lyme Parks and Rec. Department in offering the opportunity for people to purchase 50 new memorial benches which will be placed along the reconstructed western half of Niantic Bay Overlook Park, upon completion of the re-construction of the Boardwalk. For an $800 contribution, people can donate an inscribed bench to commemorate people or events. Since the number is limited, benches will be assigned as applications are approved.

Carol Marelli, a new member of the Trust, has volunteered to handle this project. She can be contacted at 860-739-2688 or camarelli@sbcglobal.net
The forms are available on our website: publictrustfoundation.org.
In addition to supporting Bob throughout his years on the Foundation, Polly Desanto served as Treasurer of the Foundation for a year. This article appeared when she accepted the job.

In April, the East Lyme Public Trust accepted the resignation of Sue Ebersole as their Treasurer.  They are very grateful to Sue for her long-term service to the organization.  She has performed this role with efficiency and thoroughness.

Having been a member of the Public Trust from its early beginnings, she will now serve the Trust as its Treasurer.